What I got this year for Mother’s Day was better than what I had  thought I might like. I was thinking I might get a massage. Breakfast in bed. A night at a fancy hotel all by myself with room service free movies and no alarm clocks or screaming hungry kids to wake me up. BUT what I got was even better than that. I got…

a normal, decent, uneventful night out at a restaurant with Ashlyn in tow.

This miraculous act of service from her is the best Mother’s Day gift I could have ever received this year. As I’ve written before Ashlyn is somewhat challenging out it public when we’re trying not to embarrass ourselves. You know, when we’re trying not to get kicked out of a place and told never to return again. We have feared this and I’m sure have come close. And why we still take her out, risking reputation and sanity, I sometimes wonder.

Last night was one of those times though where going out, even to McDonald’s, seemed better than having to cook food at home. We rushed out the door with the sippie and Cheerios hoping that the bushel of strawberries she had just eaten would tide her over through whatever meal we were about to eat. We were heading to a restaurant that we hadn’t been to since we moved here. With the promise of new management and a new menu we thought we’d try our luck with both the food and the child.

Upon entering the establishment we realized there would be a wait. I had to decide right then and there whether I would begin panicking. NO! She can sensepanic and plays on it. Keeping our calm we wait patiently. There was only one instance when Ashlyn tried to pick a fight with the suit of armor in the waiting area (why there’s a suit of armor in a Mexican restaurant is beyond my comprehension). She pulled the sign out of his hands that said “Please wait to be seated”. She showed him what she thought about that rule. The only other interesting thing was a bunch of David Cook (American Idol contestant) fans coming in. Apparently he’s from around this area. They had shirts on and I think they worked at the school he used to go to. Apparently he got the key to Kansas City and will throw the ball out on Monday night. Maybe the Royals will win.

Dinner was otherwise uneventful. Un. Eventful. Other than the fact that Ashlyn couldn’t get enough of the salsa. Fortunately for all of us she liked the beans and rice on my plate too. We saved lots of face. There was a couple sitting next to us we met while doing a craft show back in March. I guess it really doesn’t matter what they think of us, but she sure wouldn’t be willing to buy cute baby things from a mom who can’t control her cute baby.

My Mother’s Day present didn’t end there. Ashlyn even behaved herself at Hastings while we browsed to our heart’s content. I read up on storage space in the craft room and Photoshop Elements 6 for Dummies (I’m getting ready to do me some digital scrapbooking y’all!). Du pushed Ashlyn in the stroller so she wouldn’t turn evil and Reagan looked through the princess book section. We did let Ashlyn out of her restraining device stroller for a little while. She proceeded to pull random books off the lowest shelf and then sit right there on the floor pretending to read them. I think one of them was a self-help book. We’re starting her young.

All this happened Friday night. The love and service continued through Saturday. Du took Reagan to the practice for their Daddy-daughter dance and then to Lowes for their Build & Grow Clinic (where kids can build something in-store every other Saturday). We met for lunch and then he took both girls while I got to go back home by myself (by myself) to do whatever I wanted. Did I mention I was by myself?

The sweetness began when they got home. For some reason Reagan wanted to give me her present early. So I closed my eyes and held out my hands. This is what she gave me:

So this extended Mother’s Day ended up being the best of both worlds. I was on the receiving end of some acts of loving service (thank you to Du who spends much mental brainpower on thinking things up always surprise me) and some gifts full of heart (har har).

Our pastor started a series on parenting this morning and he reminded us of our biggest goal as parents. It’s not to make sure our children are well-behaved, have the neatest toys or are successful and rich. Our main goal as parents is to make sure that they end up with us in Heaven. One down, one to go. It sure makes the daunting task of parenthood seem a little bit more manageable.

On this Mother’s Day I couldn’t be prouder of the two reasons why I’m a mother. Reagan is such a big girl who loves life and everyone she meets. She’s the most conscientious six year old I know, which comes in handy when you have a younger sister you’ve got to play with and love on. And Ashlyn, as much as I like to write about her, ahem, spirited attitude she really is a special girl. As active as she is she loves to cuddle and I’m her favorite cuddle partner. As much as I enjoy my time alone, when that does happen, I wouldn’t trade the life that I have with these two girls. Until about 17 years from now when Ashlyn goes off to school and we can be empty-nesters. I’ll have put in my time by then right? 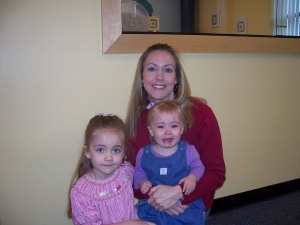 This morning right before Sunday School. Ashlyn was making sure the workers were going to earn their money…or quit volunteering all together. Reagan was sweetly putting up with it. I love them both so much.