Do you know what I mean? Sitting through a dance recital is torture, especially when the only reason you are there is for the exactly 2.7 minutes your daughter is on stage. The other 117.3 minutes is sheer torture. Reagan had her dance recital Saturday night. By the end of the night I was ready to give up and hand over any type of secret I had ever heard to anyone who wanted it. I was ready and willing to give up my country to the Chinese in order to escape. I was ready to poke out my own eyes in order to go to the emergency room…but then I remembered how long waits at the emergency room take and rethought that one.

The recital began at 6pm. I’m sure I don’t have to remind you that this is dinner time. And the theater did not allow food or drink. Torture when you have a two year old, four year old and another seven year old in tow. And when the adults accompanying them (including me) like to snack. Some of Reagan’s relatives came from Georgia to see her perform. We had a late lunch when they arrived so we decided to eat dinner after the show, and then they’d make the three hour trek back home.

We did not spend the $5 on a program (I didn’t pay to place an “ad” for Reagan in there and it would be more junk that we’d have to move) so we had no idea when Reagan’s two performances would be. As each dance would end and the dancers would file offstage I would get the video camera ready hoping Reagan’s class would be the next one on. And time.after.time.after.time Reagan’s class would not be the next one up. It almost became comical as we started recognizing the same girls performing time after time. Why wasn’t my daughter performing this much?

Finally! Her second performance! 1.3 minutes of joy. Then we had the agonizing pain pleasure of watching other girls we didn’t know perform again and again. I started trying to plan out sleeping arrangements for six additional people in our house. If it lasted any longer we would have had to camp out at the theater. With no food or drink. Whose idea was it to have a recital at 6pm?

Poor Du got a different kind of torture in the form of a rambunctious two year old who can no more sit through a two hour recital than she can sit through a fifteen minute Elmo episode on Sesame Street. It just wasn’t going to happen. Du ended up taking her outside to play “around” the fountain. She smelled distinctly of chlorine at the end of the night.

I’ve apologized to my profusely for forcing our family to endure this form of enhanced interrogation. I ended up giving them personal possessions to try to ease family relations. My mother, aunt and two cousins didn’t get back home until 2am. My brother and sister-in-law broke down on their way home. Fortunately they were 1/4 mile away from their house. Still, more torture.

I’m glad that we’re moving because I don’t think I’d endure this dance studio for another year. Overall, there really isn’t too much to complain about, but little things throughout the year, culminating in a two hour torture session make me glad that we’ll have to find a new dance studio this fall. 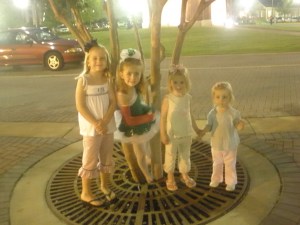 The only way we were able to tell Reagan apart from the other dancers on stage was her red cast.