We had a relaxing Independence Day. It actually didn’t pick up steam until about 5:30 pm. We rode the metro into the city,  got off at Farragut West and walked past the White House on our way to my cousin’s place. She lives on Pennsylvania Avenue and we were heading there to watch the fireworks from her rooftop.

After a delicious dinner we headed up to the rooftop (almost to be denied, but we found a different entrance). At about 200 feet above the street you get a great view of monuments and museums. I would live here if the apartments weren’t as small as our hotel room (but very well appointed, which makes a big difference)…and if the rent/mortgage weren’t as expensive as a year’s wages.

I didn’t take many pictures that night. We were reveling in the fact that we were celebrating the birth of our nation, and its independence from Mother England, from a view that was almost literally breathtaking. 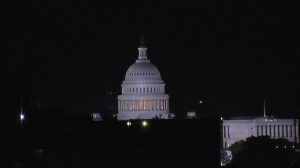 The Washington Monument behind the National Museum of Natural History 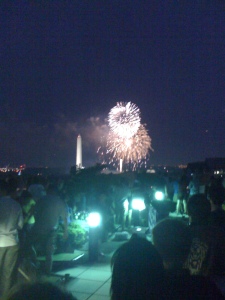 Pedestrian traffic after the fireworks 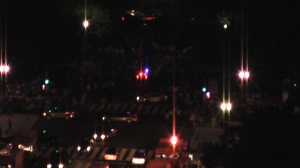 It’s difficult to make anything out in that last picture but it’s the hoards who watched the fireworks on the National Mall. I didn’t even get the most crowded part. Gobs and gobs of people came streaming down the street trying to be some of the first to catch the trains back out to the suburbs. We did not partake in this. We waited about half an hour (while watching the same fireworks show put to music on PBS) and by then everything was clear and there were no masses in the metro stations.

Thank you Kate for allowing us to invade your apartment and your evening! It was most memorable and I look forward to doing it again (please!).