That would be us. I follow “Arlington, VA” on Twitter and they tweeted today about a restaurant that offers 1/2 priced burgers on Tuesdays. Today being a Tuesday I thought it’d be the perfect time to try this place out. The name, for one, got my attention: Spider Kelly’s. I figured it had to be good to live with such a name, which I love btw.

I had to do some research. I found the website mainly to see how much the burgers regularly go for. If they’re normally $20 then a $10 price reduction really isn’t going to do anything for me. I’m cheap frugal remember? Regular price: $8. Hmm, $4 for a burger isn’t all that bad. I then looked for the kids’ menu. Uh oh…no menu for the littles. Not letting that phase me I found the next best thing, macaroni and cheese, which they would have chosen off of the kids’ menu anyway. And SK’s version is called Cardiac Mac & Cheese. Oh yeah. The website mentioned that it is a bar/restaurant. Hmm, wonder if they even allow kids since there’s no mention of juvenile sustenance on the menu. A possible drawback. The next check in the yes column though came when I found out where the restaurant was located. Clarendon. Only my favorite spot in Arlington (next to my own neighborhood, of course).

So, we head over there, knowing it’s a bar/restaurant and not knowing if our chitlins would even be granted access. Things weren’t looking our way when we couldn’t even find the place at first. Then it took almost twenty minutes to find a parking space. We did manage to find free parking (score!) after locating SK’s. All we had to go by was this: 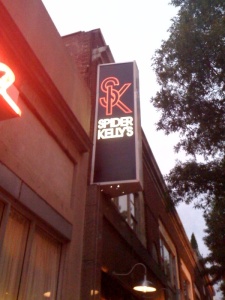 The storefront is about ten feet wide and the sign is hidden from the street behind that tree you see. Clearly it was meant to be seen by pedestrians only.

So, a family with two kids walks into a bar. I seriously thought that as we entered. The bouncer greeter met us at the door and from the look on his face I thought he was going to escort us right out. Apparently he was only worried that they had no tables immediately for us. We were seated in the “lounge” area to wait for a table. I felt so cosmopolitan. Until Ash wanted to sit in my lap and started pulling down my shirt front. Ahem.

Heart attack sandwich! Who’s watching her cholesterol? Not me tonight! I got it with Provolone Cheese, and with the “Fridge Sauce”* in lieu of ketchup it was the best burger-that-tastes-faintly-of-pulled-pork sandwich that I’ve ever tasted. Or ever will, I’m sure. The girls’ Cardiac Mac was delish as well. 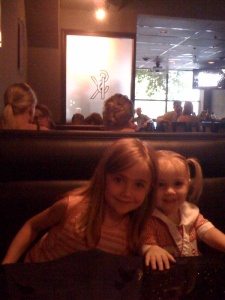 And, as we were noshing (because that’s what one does in a chic bartaurant**), at least two other under-tens came into the bar, one requiring a high chair. We felt much better knowing that this place even had a high chair. We weren’t bucking some kind of unwritten rule that families aren’t allowed into cool yuppie establishments.

The whole experience did make us feel younger again. If only for a moment…until A started crying (loudly) because she couldn’t poke R in the head with her fork.

*My guess as to what’s in the Fridge Sauce: jalapeño sauce (and lots of it), French dressing, and that’s probably it. It really was good. On the burger. I dipped a fry into it and almost burned my tongue off.

**I thought I just made up a cool new word: bartaurant, until I Googled it and darn it if someone hasn’t already thought of it. Just like my idea for a timer on your kitchen hand mixer. I’m a little late. But, really, there’s only two people maybe that have used ‘bartaurant’ before me so I’m on the leading edge of this trend!