History is fascinating, and I think it takes getting through high school and possibly college history courses for most of us until we actually begin appreciating it. Am I alone?

It took me moving to Germany and having the ability to see places in person. And they may have been just local castles or centuries-old churches, but placing them in America’s timeline (“whoa, this church was built before America was even discovered!”) made things make a little more sense.

Now, being able to see history’s sites in person is the best history lesson I could ever get. Why can’t every student be able to do this? To see Jamestown and learn about how time can change the borders of a river and therefore “hide” part of the original fort. To learn that colonists dumped their chamber pots right outside their front doors (everything just stank back then). To visit Mount Vernon and understand that George Washington was probably a micromanager (my own observation) when it came to farming. To tour James Monroe’s house and learn that the language they spoke at home was French. To visit Monticello and learn that there was quite a bit of interracial “relations” happening back then (and not only with Jefferson). To visit Boston and learn that grave sites were used to the fullest (multiple people buried in one spot) and that Samuel Adams was one of America’s original spin doctors and not the originator of Sam Adams beer. To visit Lexington and learn that Paul Revere was across the street from Lexington Green when the battle took place that morning. To go to Concord and learn that several of America’s beloved authors all lived in that area and went to church together.

Reading books, especially when you’re “forced” to for school, gets you just about nowhere. Unless you have an overactive imagination it’s almost impossible to see the historical accounts for what they truly were: everyday life for someone that happened to become pieces of history for us. Being able to visit the actual places, listen to guides who have read all the books and done all the studying, and being able to visually imagine things makes history come to life.

I guess watching History Channel programs are the next best thing. Only so much information can be imparted in an hour though. And it has to be severely edited. You don’t normally get little historical nuances, or human interest stories from background figures that really makes a story so much more complex.

I’m praying that Reagan gets a little more out of these history vacations than what she would get out of just reading a book or watching a school video. We’ll do those as well, but I’m hoping that since she has actually visited the places that we’re reading about she will take a more active interest in digging deeper and remembering and loving history. I just want to grab her sometimes and implore her to “get it”. To know how incredibly fortunate she is to be able to see these sites first hand.

And I do think we are so blessed to be able to travel to all these historical sites. I do thank God for that ability, and for the small things like cheap hotel rooms and discounted entries. By the end of this school year we will have finished studying the Civil War. As a family, however, we will continue throughout the summer to visit as many of the historical Civil War sites in our part of the country that we can. I will continue to remember or learn things for the first time about our great nation, and hopefully Reagan will gain a love of history that it took me decades to find. 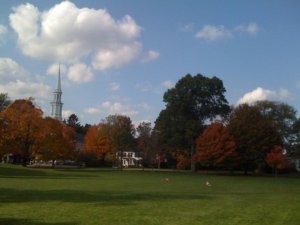 Mini history lesson: This is Lexington Green. The Battle of Lexington took place on here in the morning hours of 19 April, 1775. There were no trees back then because King George III required that all large timber (I believe it was 24″ wide or more) became the crown’s property and had to be shipped to England. Also, the soil is very rocky around there and many trees were felled in order to find fertile soil. So, from the pastor’s house where Sam Adams and John Hancock were hidden away (because the royal governor had wanted them arrested), about 50 acres away, you could see directly to the Green. There is a tavern directly across the street in which John Hancock had left a trunk containing all of his important papers. He was the president of the Provincial Congress and had papers of colonial dealings that could jeopardize the lives of many men with the English crown. Once Paul Revere convinced Hancock and Adams to leave the area and find safety in another town he went back to the tavern to get the trunk and keep it safe. Revere was in this tavern when the battle on Lexington Green happened. In his account he claims he heard the first shot to be fired as that of a pistol. Our guide said that this meant it would be a British officer then who fired first (no one knows who fired the first shot). However, the leaders of the revolutionary cause were great at spinning the details and whether Revere was telling the truth is questionable. After the Regulars left the green and headed towards Concord some family members from the pastor’s house, and others from town, quickly took the bodies of the men from the green, fashioned coffins (our guide made it seem that some were already prepared because the colonists knew war would be coming sooner or later), and buried their relatives, neighbors and friends before the British troops came back through on their retreat back to Boston.

Also, before the battle of Lexington Green, and before Revere went to Buckman Tavern to secure Hancock’s trunk, he and Dawes attempted to ride to Concord to warn the town that the Regulars were on their way. They were riding at about 1:00 am. On their way they met Dr. Prescott who lived in Concord and was heading back that way from Lexington.  Why was he on the road in the middle of the night? He was engaged to a woman who lived in Lexington and he had been courting her. Interesting, right! Of course, Prescott was the only one able to evade the British patrol that had been set up on the road in between the two cities, because he knew the lay of the land.

You may have already known about these stories, but I had not heard them, or didn’t remember them. It’s the details like these that make history so fascinating and being able to learn about them “in person” make it so much more real. Give me more!

4 thoughts on “Traveling through history”