I’m taking a break from being controversial. But as Rachel reminds me, I’m a tried and true Agnes Scott girl. We like us a little debate.

I absolutely love this movie and am not quite sure why it’s not in my library of videos right now. 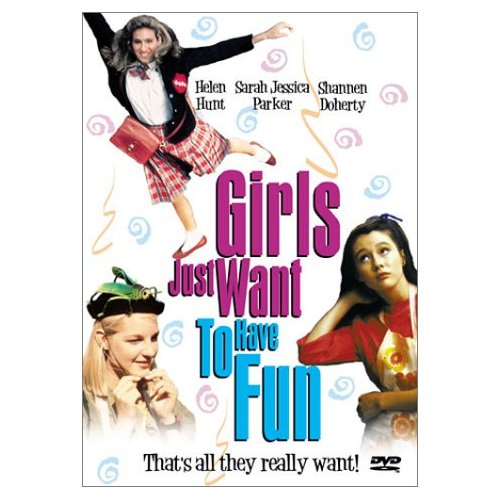 OH YEAH!!! 1985. This was way before any of these girls were famous because of relational shows, sex shows or bad attitudes.

Helen Hunt was so cool. Who didn’t try to get their hair to stand straight on end, or wonder about the effects a lighter would have with a can of hairspray. Thank goodness Aqua Net was like, pennies a can. I wanted to wear Catholic girl school clothes just to be able to reverse them and have a totally rad outfit.

It’s been so long since I’ve seen this. I wonder if Blockbuster still has it. (please hold while I check Blockbuster online). Not my store. The closest Blockbuster around here that carries GJWTHF is an hour away. Hmmm. Du’s going to be working long hours this weekend. Do I:

I think the answer will depend on how long Reagan takes to do school today. If she finished soon enough we could travel to Blockbuster, maybe even hit JoAnn and Charlotte Russe. Dinner at the mall and then home with the goods. That leaves tomorrow as girly movie day. The only drawback is that I’d have to travel back up there to return the movie…stupid inventory rules.

Ok, maybe I’ll buy GJWTHF and rent a different movie for this weekend.

Highly anticipated (by me) sequel to Elizabeth (my fave). But, alas, my Blockbuster doesn’t carry this one either.

What are some good movies that have come out lately? Preferable chick flick types since I am rarely alone to watch those. I am clueless when it comes to movies. Maybe this is where Rachel would come in handy again.

P.S. I had to include this:

I did not make this (wish I had though). Erin of A Dress A Day linked to this gem. At first I thought it was for a fan of Texas A&M. No, ladies, we all know what this is. And you get extra credit if you’re audacious enough to wear this on Health Class test day. What’s worse absolutely hilarious is that Reagan saw this and said, “it’s a goat skirt! We need to get this because it matches our truck!” (We have a Dodge). Dare I?

4 thoughts on “As promised: Fluff”