Our city has a neighborhood weekend where all the various neighborhoods in the city have their own get togethers to get the neighbors together. Seeing as how it was a gorgeous day, and seeing as how we signed dear ol’ hubby up to flip burgers and hotdogs so he was expected to be there, we trotted down to our very own Neighborhood Day.

It was like going back in time y’all. To Stars Hollow circa 2000. Gilmore Girls style. Picture a quaint little neighborhood filled with subtle self-importance with quirky characters and witty dialog. The witty dialog was all in my head, but everything else was on display like we were trying to win a GG reenactment contest.

(I should have known I’d write a post about this. Then I would have taken better pictures.)

Exhibit A: There were 5 booths set up extolling the fabulous things our neighborhood has to offer. One of those was a kids’ table with crafts and face painting. Two of those were animal rescue missions. Nothing wrong with that at all. Just the amount of booths and 40% are for the same cause.

Exhibit B: All the animal rescue dogs were leashed up in one area sniffing each other and being peddled to the unsuspecting parents who all the sudden had little kids tugging on their shorts begging to bring home a rescue pet.

Exhibit C: The president of the neighborhood association was milling around the crowd with a megaphone and microphone slung around his neck. You could only hear him if the megaphone was facing your direction. Otherwise he just looked like a mingling karaoke singer.

Exhibit D: The neighborhood elementary school’s strings orchestra put on a recital of what they’ve been learning. It possibly went on a little too long with just one or two too many wrong notes being played. Once again, very sweet, but just adding to that kitschy, little neighborhood feel.

Exhibit E: Megaphone man was introducing every single song the orchestra was playing and ended up saying things like, “let’s give them a big round of applause!” and when he had finally said that too many times went to, “let’s give them our undivided attention!”, but only the three of us who were in direct earshot of the megaphone sound waves knew to do that.

Exhibit F: A local cop drove his car up on the grass of the field we were assembled on and opened up the car for the kids to climb around.

Exhibit G: Du had to almost get physical with another one of the hotdog slingers. This guy obviously had tong control issues and was directing Du’s every move over the grill. He knew better than everyone else how dog flipping should go and wasn’t afraid to tell other men, volunteering their time, what to do. Du is a master griller. Du had to restrain himself or else he would have been put in the back of that open police car.

Exhibit H: There was a ribbon cutting ceremony to dedicate a new neighborhood picnic shelter. The orchestra was shoved out of the way so gobs of kids and old people could stand behind the ribbon with two pairs of humongous scissors to get the photo ops.

All in all it was a great day, but as a casual observer who has a tendency to see the sarcasm and irony in almost everything, I couldn’t help but laugh to myself throughout the day. It really was charming, if not a little saccharine sweet, and I do think it’s a compliment to compare my neighborhood with Stars Hollow, especially when I’m the one doing it.

Here are two bonus pics. Ash almost got carted off for eating too much cake: 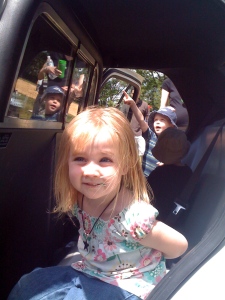 And here’s Du smoothing things out with the officer, getting Ash released: 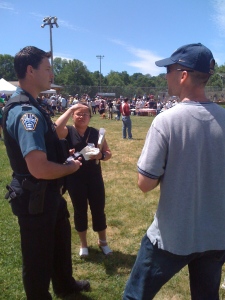 4 thoughts on “We live in Stars Hollow”