I might as well let you in on what we’ve been doing. That’s the point, right? Last time I posted was back in April. Well, here goes (big inhale).

I’m going to try something new (to me) this time because I have lots of pictures, and if I were to try to put them all on this post one of two things would happen: either your computer would blow up from exertion or you’d get bored waiting and go find some other, more interesting, blog to read. You may do that anyway. I’ve posted the pictures on Flickr and I’m hoping all you’ll have to do is click the nice little links below to go to the pictures if you’re so inclined.

Who knows how long ago it was now, but the girls and I went to Clara Barton’s House and Robert E Lee’s House at Arlington National Cemetery. We were studying the Civil War in school and it made for a nice field trip day. Weather was perfect as well. Barton was the founder of the American Red Cross (among other things) and this “house” was the original headquarters. She worked tirelessly to reunite soldiers and families during and after the War. You know who Lee was, right? He declined Lincoln’s request to lead the U.S. Army and then accepted the request to lead Virginia’s militia, and later the Confederate Army. His house and land (which he was renting anyway) was taken over by the Union and turned into a graveyard amongst other things.

Pictures of our Civil War day

Who knows how long ago it was now, but recently the girls and I went to Georgetown to their famed, annual French Market. Do not be misled, people. This was neither French nor a Market. It was a way for high-end stores to peddle their “clearance” items on a sidewalk that’s normally fit for a single-file line but during this busy Friday was set up not only with tables of food and goods, but also had traffic going both ways. We were there on a Friday and they had no intentions of blocking off the street for us. I think it’s the only thoroughfare in Georgetown (not really, but one would have thought with all the auto traffic). So, I’m pushing the stroller uphill fighting horrible wheels and people coming at me. I was expecting to find yummy French cheeses and breads and chocolates and lavender. I found crepes. One store selling crepes. $4 per crepe. Because it’s Georgetown and they can do that. I got a chicken sandwich farther up the hill ($8 and not even any chips), but I wouldn’t call it traditional French. I have no idea if it truly becomes a French market on Saturday or if the Georgetownians like to kid themselves and make themselves feel more European because their tiny enclave of DC kinda looks like Europe. Kinda. The best part was taking a break to eat lunch at a beautiful park with a nice view.

Pictures of us wishing we weren’t in Georgetown

Who knows how long ago it was now, but sometime recently the girls and I got some free food. And some almost free food. Toscana Grill, a restaurant in Arlington, offered a free lunch one day during the week. I know! And there really were no strings. I RSVPed for the girls and me and hauled our little butts over there. I wasn’t expecting much because, you know, there’s that saying, “there’s no such thing as a free lunch”, so either it wasn’t really going to be free, or they were going to be offering yesterday’s food and a mite amount at that. Well, people, there is such a thing as a free lunch and this one was delicious. And organic. It was another beautiful day so we scored seats outside and dined al fresco.

Also, Baskin Robbins offered .31 scoop night one night. We’d be a fool to pass that one up. So I had to get a picture of how crowded our neighborhood BR was. Oh yeah, Du was with us for this outing. It was close to 10pm. We’ll keep the girls out late for some near free food.

Pictures of us noshing on free food

Who knows how long ago it was now, but recently Du & I went to a reception for the Ga Tech president held at the Rayburn House Office Building. You know I felt special. I got to hob nob with not only the Ga Tech president but some Congressmen as well. I’m movin’ on up, y’all. The food wasn’t bad either. And it was free. More free food!

Pictures of me acting like I’m someone, and pictures of the House Office Building b/c I thought that was so cool

Who knows how long ago it was now, but as recently as the beginning of this month the whole family got to enjoy one of America’s greatest pastimes. NASCAR. Don’t roll your eyes. The first ten hours were kind of hot. 90 degree and hotter hot. It was a night race so we got to spend the whole hot day out in the sun with no shade. The girls made it so pleasant for us. You’d a thought they were about to drop dead of sun stroke and they let us know OFTEN. It really wasn’t that bad. It’s all about perspective. I did admit at least once that it was blazing and that was when my shoe STUCK to the track. That’s right, part of the track was melting onto my shoe. So maybe it was a little hot.

We got to walk the track thanks to Coca Cola. I do love Coke so. And we also got to walk around the pits with our Pit Passes thanks to the awesome deal my hubby’s work scored us. We listened to the radio and pit crew conversations during the race and I only had about two heart attacks and only threw one hissy fit when my driver lost at the very end of the race because some other moron couldn’t keep his car going straight. I’m going to write him a personal nasty gram.

The exhilaration of watching and feeling cars drive that fast is what makes people fans of NASCAR. You’ve got to experience it folks. At least once in your life. Those 400 laps went by in about 20 minutes to us. We can’t wait to go back. Next time we’ll skip the egg-frying hot day though.

Pictures of us getting our redneck on

Who knows how long ago it was now, but recently I got to see Laura Bush and you didn’t. Oh sorry, it wasn’t supposed to come out like that. A friend messaged me one night informing me Laura Bush was going to be in the area signing her book and would I like to go. Wha? Would I like to go? I was hyperventilating just thinking about it. Obviously my goal was to add another notch in my camera case…I’m collecting pictures of me and famous people (it’s a hobby in its infancy), but to be able to meet Mrs. Bush would be an honor.

My girls are pretty good absolute saints when it comes to waiting in lines for things. We waited a total of five hours to walk by Mrs. Bush. I didn’t even get to shake her hand, much less take her picture. Darn those Secret Service guys and how protective they can be. The bright spot, however, was that Laura had a little conversation with us. Mainly the girls. She asked them their names and when she found out Reagan’s name she said, “my best friend’s name is Reagan, and in fact, she just emailed me.” She thought Ashlyn’s name was pretty too and thought the girls were so cute. Listen, I know she says that to every kid, I’m not ignorant. I will relish the fact though that she cannot tell everyone her best friend’s name is their kid’s name. The closest I got to a picture with Laura Bush is her signature. I should have gotten a picture of me with her signature… 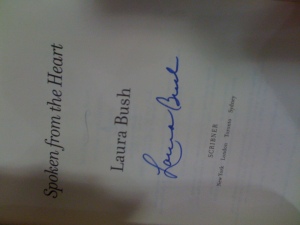 Pictures of us in the same vicinity as Laura Bush

Who knows how long ago it was now, but recently…around Mother’s Day…I went to a Mother-Daughter banquet with my oldest daughter. Our church held it in a swanky hotel and we got to have a wonderful night out enjoying each other’s company. I even ordered her the adult plate instead of the kiddy chicken nuggets so that she’d feel more grown up. And she’s past the age of making gagging faces and noises at new foods. She’ll actually try new-to-her foods. I only got one picture that night so no need to click over for that one:

Who knows how long ago it was now, but last weekend we went to Embassy Row in D.C. for the EU Open House weekend. All of the countries in the EU opened up their embassies for the weekend so people could stand in heinously long lines for morsels of food and no air conditioning. That’s probably not their exact purpose, but it’s what everyone did. We had a plan of attack and were ready to execute. That doesn’t sound very good when talking about embassies. We had our map marked up as to which embassy we’d visit first and how we’d make our way to each one we wanted to visit. First stop, Greece. Last stop, was almost Greece. We waiting about 90 minutes to get inside that embassy and still had to wait for the bits of Greek food.

It was worth it. Kalamata olives, bread dipped in olive oil with the most delicious blend of spices. A dessert pastry so sweet and some kind of natural gum substance that is probably next in line to honey as the miracle food. Mastiha, look it up. I even scored a bottle of that most delicious blend of spices and found out I can get more (to feed my new-found habit) at Whole Foods. Greek dancers entertained us while we waited with grumbling tummies.

After all that we didn’t want to wait in line to get into Ireland or France or Germany or Austria. We chose instead Estonia. No food offered there and that one even had a small line. We blew off the rest of the embassies (again, not a great choice of words) and went to an American burger joint where I had the best sweet potato fries in the whole wide world.

Pictures of us trying to be cultural

Who knows how long ago it was now, but on Mother’s Day Du ran a half marathon. Almost all of Arlington ran that race. It was crowded. I had advised Du to spit on calves though so he made his way up to the front in no time flat. We loved to see Du race and even made a poster so he could see it and be motivated to push hard to the end. What was a little more interesting though was this tall, lanky man who thought it would be a good idea to juggle the whole 13 miles. Juggle. While running. Half marathon. My own neck hurts just thinking about what his must have felt like after staring at balls in the sky for over two hours. I know how long it took him because Pacers listed his time. Du, however, recorded a personal best for half marathons. No matter that it was his first. And he looked sexy doing it.

So there you have it (exhale). It’s not like we’ve been busy or anything.

9 thoughts on “Catching up”