WELCOME SITSTAS!! I’m so stinkin’ happy for you to drop by here today! If there were a video camera recording me you’d see me floating on cloud 9…or at least doing the PeeWee Herman. I can’t wait to visit each of you and leave you some luvin’. I’m sure my hubby and girls are thrilled about the sleep I’m bound to lose making friends with every single one of you. Enjoy your time here, make yourself at home, steal some buttons if you’d like. Now, on with the show!

Tonight was Reagan’s AWANA award ceremony. She completed her first year as a Spark and was getting an award for completing her book and completing the review section as well. Needless to say I was so proud of her. Being the good mom that I am, and a bit neurotic about people getting in the way of my camera’s viewfinder, I dutifully found a seat on the second row to be in good video taking position.

Why the second row you ask? Why not the first row where I’d be guaranteed that nobody’s big head would be in any of my way? One word. And I’m sure you could guess it if I didn’t even type it–Ashlyn. I had an eerie feeling that she would be joining us for the night’s activities. After entering the apex and finding my seat I ran desperately made my way quickly, but carefully to the director to ask about childcare, who I’m sure was busy preparing for the ceremony that was about to take place, but let’s face it, finding suitable arrangements for Ashlyn takes precedence over all, because if she ain’t happy, ain’t nobody happy.

To my disappointment childcare was only available tonight for the AWANA workers, because otherwise the nursery workers would be swamped. I wanted to plead with her: “you realize who I’m holding in my arms, right? The kid who can ruin a whole awards ceremony because she won’t shut up, right? Because I am not leaving the room right at the pivotal moment when Reagan is going up to receive her award.” I even thought about usurping power and heading over to the nursery and pleading my case there: “you guys know what she’s like! You have her every Sunday and Wednesday! You know what she’s like! Please! Don’t make me embarrass myself in front of all of Reagan’s friends’ parents! It can be our little secret…”

Instead I hung my head and went back to my second row seat. Which brings me back to why I chose the second row. Since I was stuck with Ashlyn I wanted to be able to put her down on the floor to play during the evening. If I were to sit in the front row she’d either 1) crawl all around and in and out of everyone’s feet that was giving away the awards. And all those snot-nosed….lovely children who were bounding up to get their awards wouldn’t see her and would step on her or knock her over. OR 2) She’d get freaked out at how close we were to actual humans who were moving around and would begin shrieking and clinging to me not caring if she were pulling down my shirt.

How would the evening turn out? I could only hold my breath and wait minute by minute to see. Everything went well at first. After a period of getting used to being not at home, Ashlyn happily played on the floor with a happy meal toy that I thankfully had not thrown away yet (my term, btw, for this stuff is “landfill crap”. That’s all it ends up being. And we continue to buy tons of plastic landfill crap from China, that’s probably full of lead and poison…but I let her play with it all the same. She’s not a “mouther”. Desperate times as the saying goes). They showed pictures of all the kids being honored up on the screen and played rockin’ music. Ashlyn liked this and demanded to be on my lap to be able to see the screen better.

The cool multimedia presentation quickly ended and the ceremony got underway. This was Ashlyn’s cue to begin mimicking a kangaroo on crack. No longer was she happy to sit quietly on the floor playing with what could honestly be the slow death of America. She needed to be on my lap. standing. bouncing. punching me in the face. head butting me. playing peek-a-boo with the program with my eyes, not hers. giving me facial paper cuts with said program. arching her back to see how quick my reflexes were. making some type of squealing noise that kangaroos must make when they’re on crack when she realized her sippy was on the floor well out of reach. demanding to play with hundreds of dollars worth of camera and video camera. flirting with a man ten rows back.

How in the world did I even know it was Reagan’s turn to receive her award? A mother knows these things. This is where my superpowers come into play. I never know when they’ll kick in, but tonight God showed me grace and I was able to:

Ashlyn could sense that I had one-upped her. Because until now she had at least been somewhat quiet. Except for a couple of outbursts no one had heard a peep from her. They just saw her head bobbing every which way. Now though, that I had pulled off the video without a hitch she kicked her defiance up a notch. I do have to admit here that she was probably getting tired. I’ve written before that we can tell when she’s about to crash into a sleepy coma–she becomes spastic. The kangaroo motions didn’t stop. The whining started. Fortunately for me, and everyone in that room, the ceremony was coming to an end. The commander’s husband stood up to say the final prayer and Ashlyn decided that she’d drown that out. By this time I was at the back of the room bouncing her and shh, shh, shhing her as much as I could without drawing unnecessary attention to ourselves. Short prayers definitely have their time and place and this was definitely one of them.

We made it out of there award in hand, dignity in hand (I think), and sanity in tact (for the most part). I’m so thankful that Reagan couldn’t care less about the actions of her little sister. I can only imagine how embarrassment is going to start rearing it’s head as the years march on. Perhaps by then we will have figured out a way to tame the wild beast that is her younger sister. 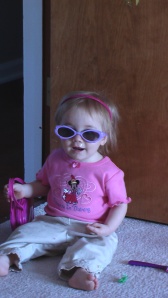 72 thoughts on “Where the Wild Things Are”