All I have to say is Reagan and I picked both the winner and loser of Project Runway, Episode One. That’s not really all I have to say, but it’s a good opening isn’t it. For this challenge the designers had to use products they found at a grocery store. And they only had 30 minutes to gather the materials. Seriously, I’d have designers block at that very second and be reduced to a bawling mess in the produce aisle. Of course, I’d probably be in the meat section, wanting to be all avant-garde…not realizing the starving model who was lucky enough to be assigned to me would realize she hasn’t eaten in two weeks and devour my dress, raw as it would be, before she hit the runway.

As Tim Gunn was explaining the challenge I said, “I’d make a teabag dress”, because I’ve actually done that before (and if the desktop were hooked up I’d transfer the picture to show you. I was even pregnant with Reagan at the time). Reagan, all six years of her, said, “that would be so ugly.” My fashionista-in-training, who likes to mix and match four different tones of pink, is telling me what wouldn’t look good. I can’t believe no one chose to do that. Probably because it’s been done to death. And they all know that. And I don’t. And that’s (one of the reasons) why I’m not on the show (yet). It would still look good though.

What’s amazing and actually disappointing is that so many of the designers chose to use tablecloths. Already fabric, yes. Innovative, no. It’s strands of cotton covered in plastic, all made in China of course, but it’s still a type of fabric. If Heidi is sending you into a grocery store to make an outfit, you better not come out with tablecloths. I consider that cheating. SPOILER ALERT: DO NOT READ PAST HERE IF YOU DON’T KNOW WHO WON/LOST.

So, our favorite designer was Kelly who chose to use vacuum bags and bleach/dye them. She even used the spiral-y thing from a notebook to make hook and eye closures. How innovative is that!?!? I want to be her now. For her bodice she used coffee filters that she tinged with a lighter. They looked like flat paper plates…like headlights coming at you. But innovative all the same. Overall, I’d wear her dress (if I were in the desert with absolutely zero wind and zero percent humidity and zero chance of rain). It rocked. 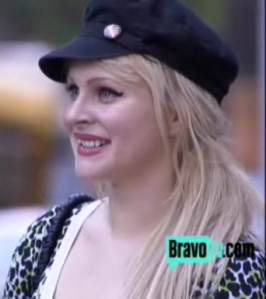 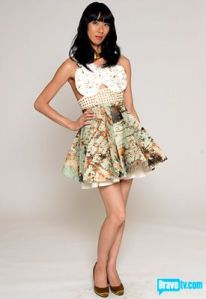 Poor Jerry. He was going for a shower curtain raincoat look. Tim came in and chastised every single one of the tablecloth users, which included him. Plastic shower curtain is kind of a fabric too. So Jerry, being a genius, decided to stick with his original design. He did vamp it up a bit, but it made the model look like she just came from the psych ward and was getting ready to go on a serial killing spree. I’m not kidding. She had the gloves, the boots, and of course the raincoat. All she was missing was the chainsaw. 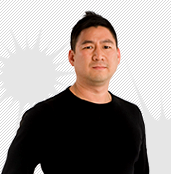 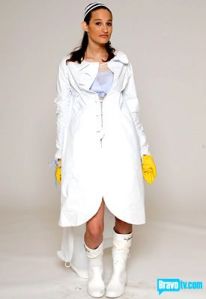 I think I’m going to enjoy this season. As Tim said, it’s probably the most diverse group of designers they’ve had yet. Rockers; shy girls; pinup-style girls; gay guys; straight guys. They’re all there. And may Reagan and I continue in our as of yet unbroken streak of selecting “who will stay and who will be out”.

2 thoughts on “You’re Either In Or You’re Out”