How I’m the Worst Mother In The World
and the Females of the Not So SAHM Household are all crybabies….

This morning we awoke to the local tornado siren going off. We just moved from the Midwest–I thought we had escaped the tornadoes. Apparently not when there’s a tropical storm wreaking as much havoc as she can before dissipating somewhere over Canada or something. In reality, we flew over the bad storms that screamed through here in February (and I blogged a little about that), so I knew there was a possibility of funnels. The threats were just that, and we had prayed fervently that that’s all they would be. Not having a basement, and not having any room that is in the center of the house that can be closed off for safety, we felt like sitting ducks.

The real tornado hits while we are at the dentist office. This one isn’t a spinoff of Faye. It is a little spinoff called Ashlyn. Are you even surprised? As we pull into the parking lot of the dentist office we are immediately in awe. The front of the office is a caboose. This is strictly a child’s dentist office, see. Ashlyn is none the wiser that we are at a medical establishment. We are all happy (dare I say excited?) to walk inside. 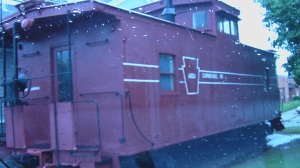 Once we get inside Ashlyn sees that some people are dressed in funny outfits and becomes not so happy. It’s probably because, oh, I don’t know, she spent the last fall and winter in the doctor’s office for her ear infections? Who can blame her? We are ushered over to the caboose, which is the waiting area, and she loses all sense of fear (for the time being). Tornado Ashlyn takes over.

I think we’re going to rename her “Taz”. 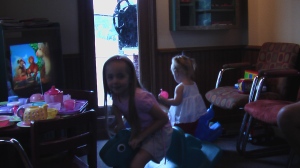 the stairs are out of the picture to the right 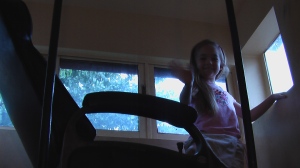 We do our time in the waiting room and are finally called back to…another smaller “consultation” room (where waiting is done as well). This is where the hygenist gets to test me and ask me if the girls have ever seen a dentist before?, how many times do they brush?, what do they drink?, do we floss?, Alabama or Auburn? It almost goes that far (and around here you are for one or the other…Roll Tide). During the interrogation litany of questions Ashlyn takes advantage of the fact that Mommy’s on the defensive answering questions and darts over to the other “consultation” room to play with one of those ‘beads on various wires’ toys (just like the one at home she never is interested in). I will never look cross at another mother who cannot control her kid out in public, because I just became her.

I’m going to gloss over the part where they try to take both girls back to the chairs without me and Ashlyn screams like she’s having her teeth pulled that very second, and get to the part where we’re all back there together and Ashlyn’s screaming like she’s having her teeth pulled. This office really is cool, and I almost wish I could be a patient myself. The back room is just a big play room with five or six dentist chairs and requisite equipment interspersed amongst the toys. They get to take the toys to the chairs with them and get to pick life-sized stuffed animals to sit with, but kids aren’t dummies and they know when they’re being worked on. I’m not even going to think about the sanitary issues with stuffed animals and toys…so please don’t you think about it either. K?

Reagan did very well and was a trooper. She had her teeth x-rayed and the dentist poked and prodded around in her mouth for a couple of minutes. Ashlyn, still in tornado mode, would have nothing of laying back in a reclined dentist chair all by herself. I’m sure she gave every kid there a case of hives. They’ll all need therapy after that scream. I ended up holding her arms while the dentist held her head. Just to stick a mirror in there and poke for a second.

Tomorrow I will finish the story, which makes the alternate title fully necessary and completely appropriate. My life is like a country song today: real storms and emotional storms wreaking havoc in my life. Prayers and pitty always accepted.

Right now Tornado Taz is sleeping off her torrential tirade. We all know though that tornadoes can touch down more than once…

13 thoughts on “Tornado at the Dentist’s Office, or…”