The cherry blossom trees around D.C. were given by the city of Tokyo in 1912. Over 3,000 trees. They’re all in full bloom right now and today was the kick off of the National Cherry Blossom Festival. 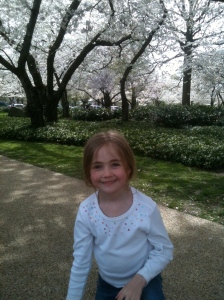 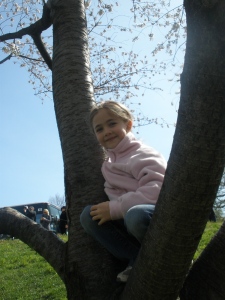 The Kite Festival was part of the day’s events and we headed there first. Why we didn’t think to bring a kite is beyond me. Something learned for next year. It was neat to see all the kites flying around the mall area, although you won’t be able to tell from any pictures I took. For some reason I didn’t get a picture with a bunch of kites in it.

I did get a picture of Du and Reagan and Ed doing cartwheels among the kite flyers (this was later in the day). 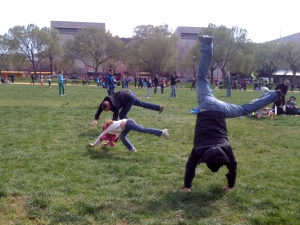 A friend from high school emailed me this morning letting me know she and her family would be out there. I’m sick that we didn’t get any pictures together, but Lauren, we enjoyed meeting you and your family there and walking around, even for the short time that it was. We did take pictures of each other’s families. 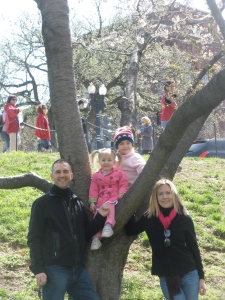 We then met up with some other friends and spent the rest of the day with them. We headed to the National Building Museum where the opening ceremonies of the Festival were being held. Had we known we would have gotten there sooner because they had a lot of kids crafts to do. We got there right as the craft tables were closing up though. 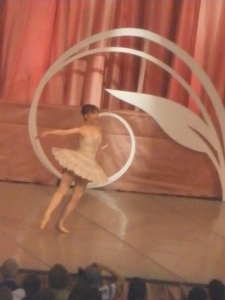 After the opening ceremony we decided to head into Chinatown for dinner. There is no Japanesetown or I guess we would have gone there to stick with the whole Cherry Blossom theme…

10 thoughts on “Cherry blossoms and Chinese”