BFF* is such a loaded and deep term. Who am I kidding. It’s used to mean anything from, “you’re my life-long friend in whom I can always trust and confide” to “hey, I just met you, I don’t really know you, but we seem to like the same things so I’m going to pretend that we’re best buddies…or besties”.

Unless you’re my  husband… 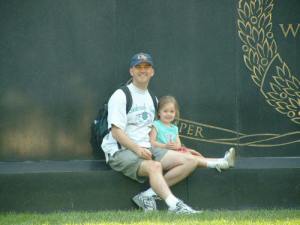 Lately they have become BFFs in every sense of the word. They will be life-long friends and can confide in each other and they like the same things and gossip about others (mainly me). The pictures above were probably the beginning of their BFF status. They even like to take the same style pictures. And here they are sharing secrets with each other:

Subtle. I know. They call each other all the time and talk about all the little things going on in their lives. Richard used to call me to tell me about that stuff, and I would relay that information to Du. Sometimes I would forget though, and so Du would be uninformed and ill-equipped. Like that time I was supposed to tell him to pack his golf clubs on our trip to the beach. Oops. Maybe it was my lack of attention that drove them together. Be that as it may, their BFF relationship has been blossoming and pushing me out.

Du (to Bro): Dude, Vicki’s sitting next to me texting you. She’s, like, so lame for wanting to be friends with us.
Bro (to Du): I know dude. I couldn’t help texting back to her though. She was feeling unloved.
Du: laughs maniacally

At that point I grabbed Du’s phone to see what could be so freaking funny.

Me (to Bro): Unloved huh?
Bro (to me): (verbatim) “I could see u were getting upset at me callin him and not u. Can someone say JEALOUS”

Then there were some words used that we really should not discuss. Like “loser”. And “Obama groupy”. It got rough.

Richard suggested we get counseling the next time he’s up for a visit. I don’t know though. I kinda like how he and Du are BFF now. It means that I don’t have to be responsible any more for passing along all those details that I could never seem to remember to pass along. I like my guy having a BFF.

*For those who weren’t 8-18 in the 80s or who haven’t been around for its resurgence in the 8-38 crowd this go around, BFF stands for Best Friends Forever.

NB: Little to none of this post may be true. Other than the male BFF part.

And P.S. You’ve got to check out my hubby’s comment defending himself below. It’s cute.