I homeschool for many reasons. One is the flexibility homeschooling affords on so many different levels. We can “do school” in the car on a trip or on a Saturday to make up for a missed weekday. Or we can even play Scrabble as our spelling lesson for the day. That’s what I chose to do today. We’re all a little antsy for Christmas Eve so Scrabble should have been a fun, innocuous way to get some spelling in.

We were plugging along, both somehow managing to find words that would fit on the board with our jumbles of letters, when Reagan picked an ‘x’ out of the pile to replenish her stash. She likes to form words with the letters that she has in her pile, no matter what is on the board. She makes words with her seven letters and then tries to find a place for them. She was desperately wanting to use the ‘x’ somehow.

I was concentrating on the alphabet soup that was my pile, including two ‘z’s when I hear Reagan say, “I can use ‘sex’!” Now, I’m not usually good at controlling my facial expressions. Usually I end up making expressions that I didn’t even know I was making, much less mean them. Somehow I channelled my inner botox and didn’t move the slightest muscle. In fact, I froze in my seat. I think my heart stopped.

Recovering, I said, “that would be good except you can’t use Latin words.” Saved! I thought. She’s thinking of her Latin vocabulary. “No, Mommy, I mean ‘sex’,” and she kind of does this little body shake. I wanted to cry and laugh and die all at the same time. She’s even adding movements!? (None that I had ever seen when referring to sex though.) “Um…what do you mean?” I ask cautiously because this could turn into a forced birds and bees convo. “You know, like Sex and The City!” 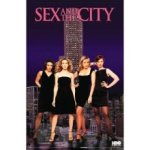 Now I KNOW she didn’t learn that in this household. I’ve watched one show maybe and that was in the middle of the night when Du was on a business trip and I couldn’t get to sleep and wanted to see what all the hype was about surrounding Carrie Bradshaw (who has some taste issues, btw). So where did my little innocent learn about Sex? At the local mall from a twenty foot banner hanging from the ceiling advertising it. The mall is fair when promoting sex shows though. They also have had banners for Desperate Housewives and shows geared towards teens that are probably all about sex. At least, that’s how the girls are dressed and that’s the facial expressions they have on the posters staring back at my innocent child.

Another reason we homeschool is to expose the girls to situations and topics when we think they can handle them. Obviously they are not in a bubble or locked away until we marry them off to someone who will keep them in a bubble. Our girls will be well-rounded and well-versed with the ways of the world but their knowledge base will be biblical. And obviously we aren’t going to be able to shield them from little zingers like a big sex poster hanging IN A MALL where people of all ages should be able to go and enjoy society without having crap shoved in their faces. (And I’m looking at you, too, Victoria’s Secret and Abercrombie & Fitch.)

So, back to the ‘sex’ and the shake. I asked her, “what does that mean? Sex and the city?” And my innocent little girl, still unfazed by how the world is trying to get her to grow up way too fast, says, “oh, you know…cute, style…” and she does the little shake again, representing to her a cute, stylish little pose.

2 thoughts on “Thank you, Candace Bushnell and Pentagon City”